Wudu (Ablution) is worshipping Allah the Almighty by using pure water on certain body parts in a specific manner. It is the Islamic procedure for cleansing parts of the body, a type of ritual purification.

The obligations of Wudu:

The obligations of Al-Wudu are six, and they are in the following order:
1. Washing the face, which also consists of rinsing the mouth and the nose (by inhaling water into the nose and blowing it back out to remove any mucus, if any, from the nose).
2. Washing both hands including the elbows.
3. Wiping the head (the top of the head or the hair), including wiping the ears.
4. Washing the feet up to the ankles.
5. Following the order as it has been ordered.
6. The continuity between the washing of the parts.

Whosoever had an amputated part (arm or a leg) then the washing of that specific part is no longer obligated, nor is Tayammum, because the person has lost the place of the obligation which is the limb, even if he implanted a synthetic part in its place he still is not required to wash it or to perform Tayammum on it.

Everything that eliminates the water from reaching the skin or the actual nail such as nail polish, glue or artificial nails nullifies the Wudu and in order to correctly do perform the Wudu these kinds of material need to be removed.

Some of the Sunan of Al-Wudu:

The quantity of water used for Al-Wudu:

In accordance to the Sunnah, the Muslim shouldn’t wash his body parts more than three times, and he should perform Al-Wudu with as much water as the Mudd (a measuring method which equals to approximately an average cupful), and he shouldn’t waste
water, and whoever used more than that then he has done wrongfully, exceeded and transgressed.
Whosoever has an artificial nose or finger made of gold or implanted removable artificial teeth then he doesn’t have to remove them to begin his Wudu, the same rule goes for the ring and the watch.

What should a Muslim do if he woke up from his sleep:

The description of the sufficient Wudu:

The description of the complete Wudu:

Intending to perform Wudu by heart (without saying anything by tongue), then wash the hands (palms only) thrice, then rinse the mouth and the nose (by inhaling water into the nose and blowing it back out to remove any mucus, if any, from the nose) by using the same palm, half of the handful for the mouth and the other half for the nose, and this step is repeated thrice with three handfuls, then wash the face thrice, then the right arm
is washed up to and including the elbow thrice, as well as the left arm.

Then the head is to be wiped from the beginning to its rear (the top of the head) and then back to the front right where the wiping began, then the index fingers are to be inserted into the ears (to wipe them from the inside) while, at the same time, the thumbs are wiping the outside of the ears. Then wash the right foot including the ankle thrice, and then the left foot. Al-Wudu should be performed thoroughly and properly, and the fingers should be ran in between the fingers to clean them thoroughly, and then after completion the person should supplicate with the appropriate supplication as it would be
mentioned by the will of Allah. 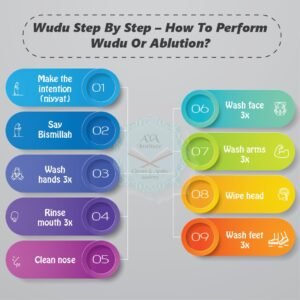 The description of the Wudu of the Prophet:

Narrated Humran (the slave of ‘Uthman) I saw ‘Uthman bin ‘Affan asking for a tumbler of water (and when it was brought) he poured water over his hands and washed them thrice and then put his right hand in the water container and rinsed his mouth, washed his nose by putting water in it and then blowing it out. Then he washed his face and forearms up to the elbows thrice, passed his wet hands over his head and washed his feet up to the ankles thrice. Then he said, Allah’s Messenger said ‘If anyone performs ablution like that of mine and offers a two rak’ats prayer during which he does not think of anything else (not related to the present prayer) then his past sins will be forgiven.’

The types of the Wudu of the Prophet

The virtue of Wudu

1- Narrated Abu Hurairah:
At the time of the Fajr prayer, the Prophet asked Bilal, “Tell me of the best deed you did after embracing Islam, for I heard your footsteps in front of me in Paradise.” Bilal replied, “I did not do anything worth mentioning except that whenever I performed ablution during the day or night, I
prayed after that ablution as much as was written for me.”