The Holy Prophet is the last Prophet of Allah SWT. He is the most beloved prophet of Allah SWT as well. It should be the belief of every Muslim that there has been no better human being on Earth than our beloved Prophet.

Every person who brings faith in Allah and His Prophet must be proud that they became the part of the Ummah of Hazrat Muhammad because even the previous prophets of Allah wished to be the part of this Ummah. we will mention about 20 great facts about Prophet Muhammad (PBUH) briefly, about his life in general.

Prophet Muhammad was the founder of Islam, He was born in Mecca in 570 A.D, and spent his entire life in what is now Saudi Arabia. His father died before Muhammad was born, and his mother died when he was a young child.

He was monogamously married to his first wife, Khadija, until her death after about 25 years of marriage. He had four daughters and at least two sons(both of whom died as infants).

He was the final prophet sent by God to reveal their faith to mankind. so these are some great and interesting Facts About Prophet Muhammad (PBUH).

Prophet Muhammad and His Message

Muslims believe that Islam is the faith that has always existed and that it was gradually revealed to humanity by a number of prophets, but the final and complete revelation of the faith was made through the prophet Muhammad in the 7th century CE.

His main message is believing that to teach all mankind that there is no God that deserves to be worshipped except Allah, and that life should be lived in complete submission to the will of Allah, was attractive to many people, and they flocked to hear it.

These are some interesting facts about Prophet of Islam Muhammad (PBUH) that Muslims should know about him.

Enjoy his Story with Mufti Menk.

Before even when Allah’s Messenger started preaching Islam, He earned the title of  Sadiq and Amin from th people of Mecca. People at that time used to deposit their assets and belongings to the Holy Prophet and he used to act as the guardian of those belongings. We should learn the lesson of honesty and integrity in our daily rituals of life from the Holy Prophet.

Women had very few rights in the 7th century, even their right to life was questioned and the Arabs had a custom of burying their daughters alive. Messanger Muhammad (peace be upon him) and the Quran chastised the Arabs for such a practice.

The Messanger Muhammad introduced several changes to the status of women in Arabia at the time. He allowed women to inherit, consulted women, and weighed their opinions seriously. Islam gives her the right to pray in mosques.

According to the summary of one of the Hadiths of Holy Prophet , the prophet that a perfect food contains four things:

2- It is being eaten with others

3- It was started with the name of Allah SWT

4- It ended with the praise of Allah SWT

Prophet Muhammad was from afar the most beautiful of men and most glorious, and close up he was the sweetest and the loneliest. In company, he is like a branch between other branches, but he is the most flourishing of the three in appearance, and the loveliest in power.

He has friends surrounding him, who listen to his words.

Since he became a Messenger many people tried to kill him. They successfully exiled him from Mecca, and killed his followers, spread false rumors about him, and did their absolute best to end his life.

At the end of his life, he said:” Today I say to you as Joseph said to his brothers: ‘ This day there is no blame on you.’ Go your way for you are free.” 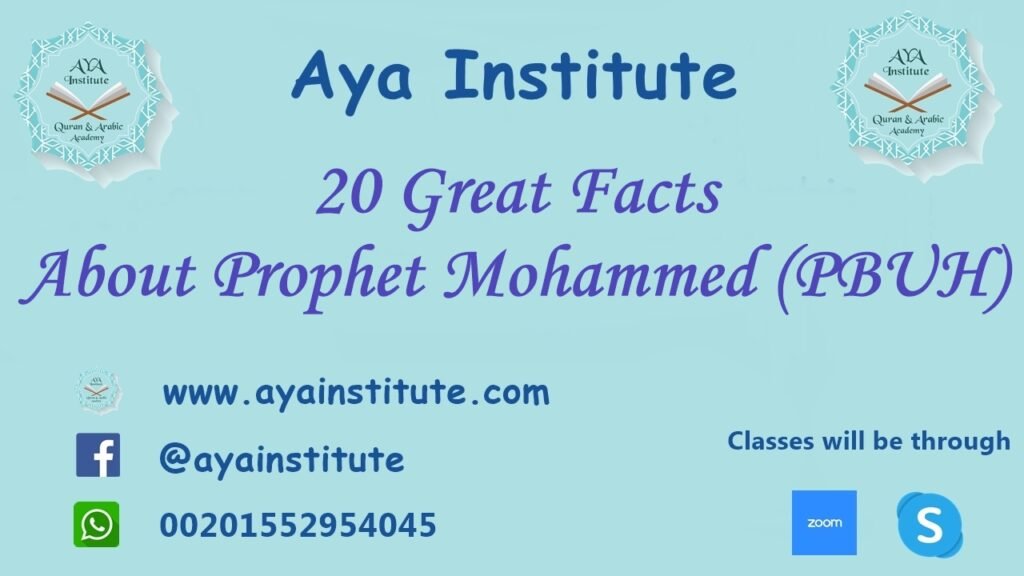 In Aya Institute, you can learn about Islam through the Islamic studies program to learn more about Islam Religion.